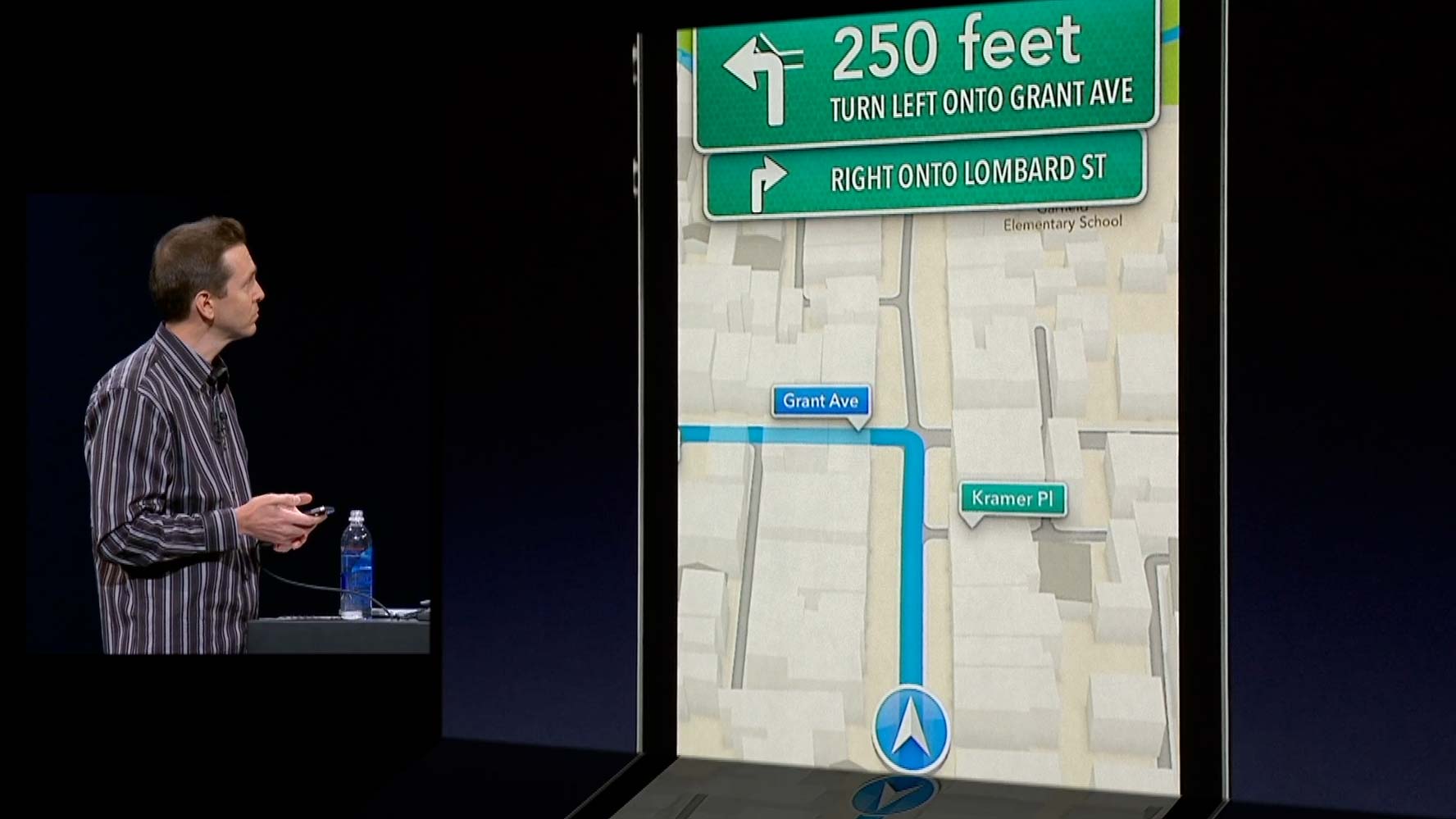 For some folks, ignoring the instructions their navigational software provides is a badge of honor. By “some folks,” I mean “my wife’s parents.”

“It wants us to take the turnpike? I’m not doing that. That’s stupid. I’m gonna cut across on 33, turn behind the Wawa, and avoid the traffic.” They say these things, and I have no idea what they mean, whether there’s a GPS or navigation app in front of me or not.

My in-laws, the Krutzels, live just 10 minutes away. We visit fairly frequently. For the longest time, whenever I drove to their home along Route 9, as I approached their exit I repeated a stupid mnemonic device in my head: “The Kwutzels live in the west.”

I said this line to myself every time I drove to their house to jog my memory as to which of the two exits I had to take: Union Hill Road East, or Union Hill Road West. When we first moved to New Jersey, I couldn’t even remember if which exit I took depended upon the direction I was traveling on Route 9. Thus was born the Kwutzels.

I am terrible at directions. But now I have a GPS in hardware and software. I once was lost, and now am, you know, less so.

When I got my driver’s license at 16, I occasionally wanted to drive beyond the confines of my hometown of Wyomissing, Pennsylvania. This was years before GPS devices or smartphones were a thing. Instead, when you wanted to know how to get somewhere, you asked dad, and dad took out a massive folded map.

Worse than the maps that dad would cart out were the directions that he’d provide. Dad’s directions were copiously detailed: “You’ll go past the following four exits: 222, 422, 422 Business, and Pennsylvania 39. And you’ll pass billboards for several restaurants, and a business center with a blue roof. Turn right at the seventh traffic light after the blue roof.”

I would climb in my car and wend my way through my six stapled sheets of directions, sobbing hysterically as I tried to figure out whether I was still on the prescribed route or was instead hopelessly lost.

In college, I had the one at-fault accident I’ve ever committed. Staci and I had gone to the mall that day and were headed back home to Brandeis.1 We became increasingly lost.

We ended up somewhere in Boston. This was a problem, as Brandeis is located in the opposite direction. Staci and I both grew steadily more upset: We had no clue where we were. The only reason I wasn’t scream-sobbing was that there was another human being in the car, and that human was female.

As we entered YAR (Yet Another Roundabout), we saw salvation: State Police headquarters just ahead! I flipped on my signal to turn right into the station, and I would have gotten away with it too, were it not for the car immediately to our right that I turned into instead.

The roundabout was one goddamn lane, but it immediately became two lanes when you exited the circle. In my defense, the lane markings didn’t indicate that important fact for another several hundred feet, and I was lost, and I was working really hard not to cry in front of a girl.

The two police officers in the parking lot, ready to head home for the day as I literally crashed into the State Police headquarters, took pity on me. By which I mean, after they issued me a $400 ticket for “unsafe turning,” they told me how to get to Brandeis.2

Truth is, I’m not so great at remembering directions. We made it back, but it was Staci’s job to memorize the directions. I get panicky and can no longer recall whether I was supposed to go left on Hawkins and right on Smithburg, or go left on Smithburg and curl into a ball crying.

When my then fiancée (and now wife), Lauren, and I moved to Los Angeles after college, navigation was an even bigger challenge. Everyone drives everywhere in Los Angeles, and the roads follow no discernible pattern. Freeway names are always prefixed with “the,” as in the 405, the 10, the 110, and the big one with the thing and oh God I’m lost again. There are a couple of major roads named Canyons of some sort, and everyone says that one is better than the other, though not everyone agrees which is which. There’s a Little Santa Monica and a Big Santa Monica.

Lauren quickly learned the ideal way to give me directions. “Head to the stupid intersection, then turn like you’re going to go to Target, but at the light before you’d turn toward Target, turn the other way to get to the supermarket.”

Lauren further observed that, very often, my navigational instincts were what experts refer to as “dead fucking wrong.” She eventually coached me that, in general, if I felt lost and my inclination was to turn right, I should turn left instead. That approach worked decently for a while, but then I thought too much: “I think I should turn left, so I’m going to go right, but because I’m going to go right, that probably means I should actually turn left instead.”

Technology has dramatically improved my life on many fronts, and modern computing has been the core of my income for my adult working life. But no single technological advancement has done more to ensure my overall sanity than GPS. I mean, TiVo helped my sanity a lot, since I no longer single-handedly needed to keep the VHS tape label industry in business while capturing all the television I craved, but still — GPS takes the “most improved sanity” award each year at the prestigious Friedman Institute for the Directionally Challenged.

Even before GPS, the advent of regular old dumbphones helped me a lot. That’s because before I had a cell phone, any trip behind the wheel of a car where I headed some place I wasn’t sure how to get to made my impending death seem like a very real possibility. I was certain that there was a chance I’d never find my way back home, and that I’d get so lost that I’d never be seen by humanity again. An irrational fear to be sure, but one that consumed me nonetheless.3 Anyway, once I had a phone, I felt reassured.

But the freedom that GPS affords me is matched only by the sense of freedom I felt when I first got my license and a car: Then, I knew I theoretically could go anywhere. With GPS, now I know I actually can do it. Except for, you know, Australia.

I use both a stand-alone GPS unit from a few years back and a trio of navigation apps on my iPhone, depending upon which car I’m driving and what USB charging cable is inside it. Whichever I’m using, so long as the road it’s suggesting I turn onto exists, I’ll heed its advice.

My in-laws — not so much. Where for me, every drive I take is through a seemingly different set of streets even if it’s the thousandth time I’ve gone that way, my in-laws see any given trip as a Traveling Salesman Problem that has to be optimized better than any GPS software can manage.4 My in-laws have a dialogue with the GPS, and they believe they are always right.

(Direction-related conversation happens more than you might realize. I always try to act like I know what people are talking about and go with the wisdom of the crowd. At a recent birthday party, one mom asked whether she could turn left out of the lot to pick up something called 34 and take it west to the mall. I had no idea. So I waited until the other parents in the group started nodding in the affirmative, and I joined in. If I’m the only one around when these questions come up, I try to use the same cold-reading style that talking-to-the-dead scam psychics employ: I’ll nod slowly, say tentatively “I…think so…,” ready to shift gears the moment my inquisitor shows any hesitation. As I’ve written previously, I’m a liar.)

The point is that, unlike my in-laws, I listen to and trust the GPS. If I make a wrong turn, or if — on some whim of insanity — I actually do ignore the GPS’s instruction, I know it will forever remain patient, recalculating as needed to get me where I’m going. But even if I question whether it’s really efficient to zigzag through town, I know that the GPS has my best interests in mind: reaching my destination. After Siri, the voice that tells me “Now, turn right” is maybe my best friend in the whole wide world.

We have the technology

I’ll never improve at directions, and technology ensures that I remain bad. But believe me, I’d love to comprehend maps when I look at them, to internalize the way the roads are laid out instead of doing my best to simply memorize which streets connect to which other ones. It’s not in my power.

Now that I can rely on navigational devices and apps to get me from Point A to Point B, whatever learning I’m doing comes more slowly than ever. You sense-of-direction-possessing norms can relate, if not sympathize directly: How many of your friends’ phone numbers or email addresses have you memorized now that your iPhone remembers them all? How many facts — addresses, names, office hours — do you fail to remember, knowing that they’re a simple Web search away? And do you set your iPhone wallpaper to a snapshot of your children’s faces so you can remember what they look like now that you stare at your smartphone all the time?

Technology’s a crutch, and it lets us offload an increasingly large portion of our brains. I’m OK with it because I’m assuming that I’m using that freed-up brain space to store other important things instead. As soon as I remember one, I’ll tell you.

Lex is an author, senior contributor to Macworld, and podcaster. He heads up podcast ad sales for The Mid Roll. Lex has three kids and one wife. His hobbies include writing third-person bios for Internet publications.