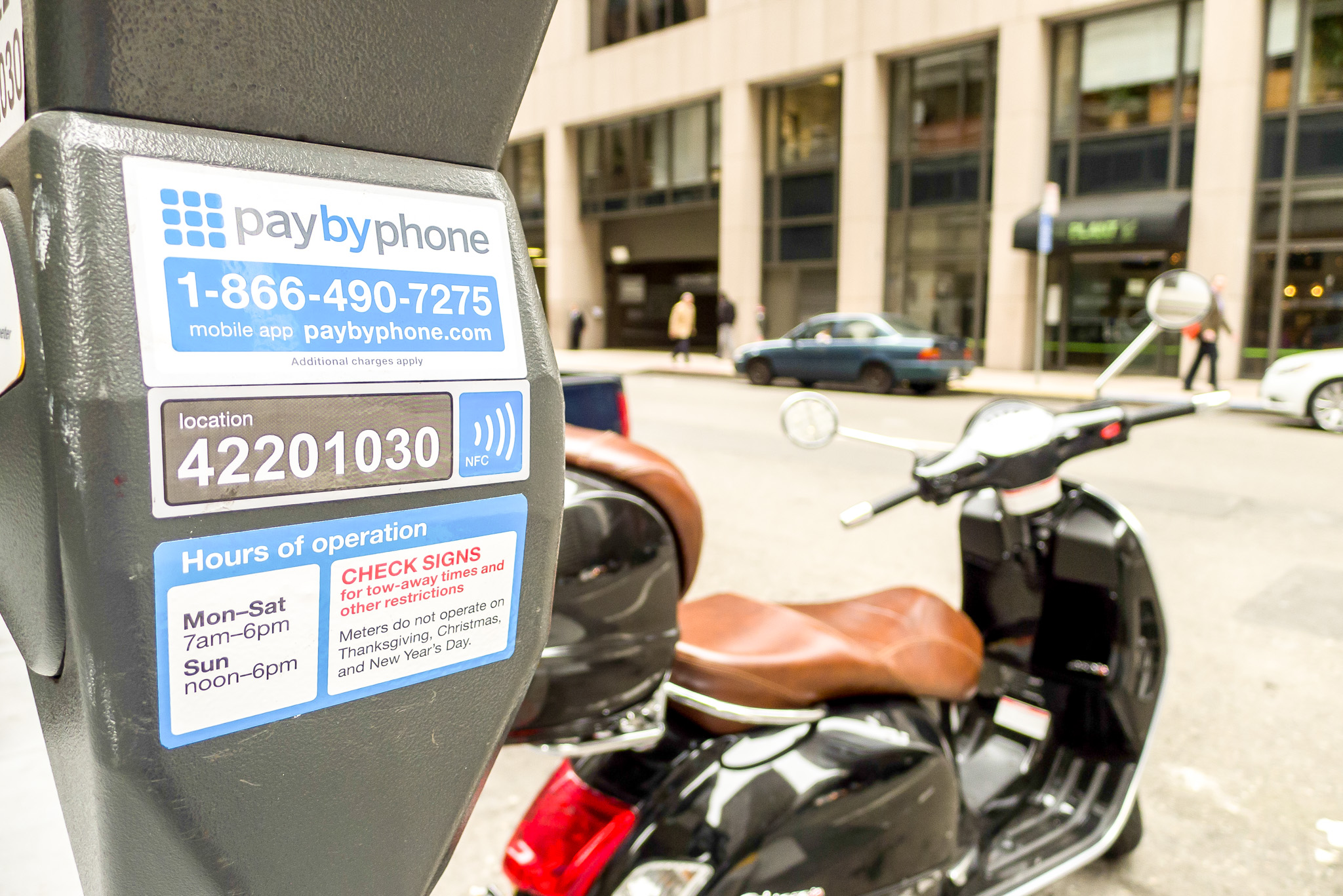 On March 19th, a man named John drove from Sonoma County into San Francisco for a lunch meeting at Zuni Café. Shortly before noon, he pulled his blue VW Passat into a space on the south side of Hayes Street, got out of the car, and used an app on his phone to feed the meter.

In the pavement beneath John’s car, a battery-powered sensor the size of a hockey puck noticed a 3,400-pound hunk of metal overhead. The puck sent a signal to the next sensor down the line. The signal hopped through a wireless mesh network of 7,000 similar pucks in the city and, less than eight seconds later, found itself as a row in an Oracle database maintained by SFMTA’s SFpark program.

City transportation engineers will then analyze the parking data from the 500 block of Hayes Street and hundreds of other blocks citywide. If the block averages more than 90% full, they’ll raise the meter price — at least for that time of day. If a block boasts ample free spaces, they’ll lower the price. The city adjusts prices every 6 to 12 weeks and has done so 10 times since SFpark launched in 2011.

The data collected by SFpark is available in a free, live public feed that serves various find-a-spot apps including the city’s own.1 But John didn’t use an app to find his spot; he just pulled right in.

Why did San Francisco spend $19.8 million in federal grant money to turn parked cars into data? Let’s ask John. Parking in the city, he says, “is much more available now than it used to be, especially in high-traffic areas.”2 The laws of supply and demand apply to parking as surely as they do to Zuni Café’s roasted chicken for two ($48 at lunch).

Imagine your city passes a law requiring that all hotels in town, from the fleabag on Mediterranean Avenue to the Four Seasons on Boardwalk, charge $100 a night. You don’t have to be an economist to know what will happen: the best hotels will be booked to capacity every night, and no one will ever stay at the CheapSleep.

No city price-fixes its hotels, but plenty make the same mistake with curbside parking spaces. Make them all the same price, and you’ll never get a spot on chichi Hayes Street unless you drive around (and around, and around) waiting for one to open up.

Making John’s parking life easier is great, and more parking turnover tends to be good for storefront businesses and restaurants. But SFpark has loftier goals. Drivers hunting around for spots don’t just annoy themselves and each other. They’re a public nuisance. They don’t watch the road. They drive too slowly. They’re angry. They pollute. They cause traffic jams.3

“It would be a big achievement to reduce parking search time from an average of 10 minutes to 2 minutes,” says SFMTA’s Jay Primus, SFpark program director. “In aggregate, over thousands and thousands of people every day, circling less, even just a little bit less, improves their lives significantly and helps to achieve the broader social goals.” 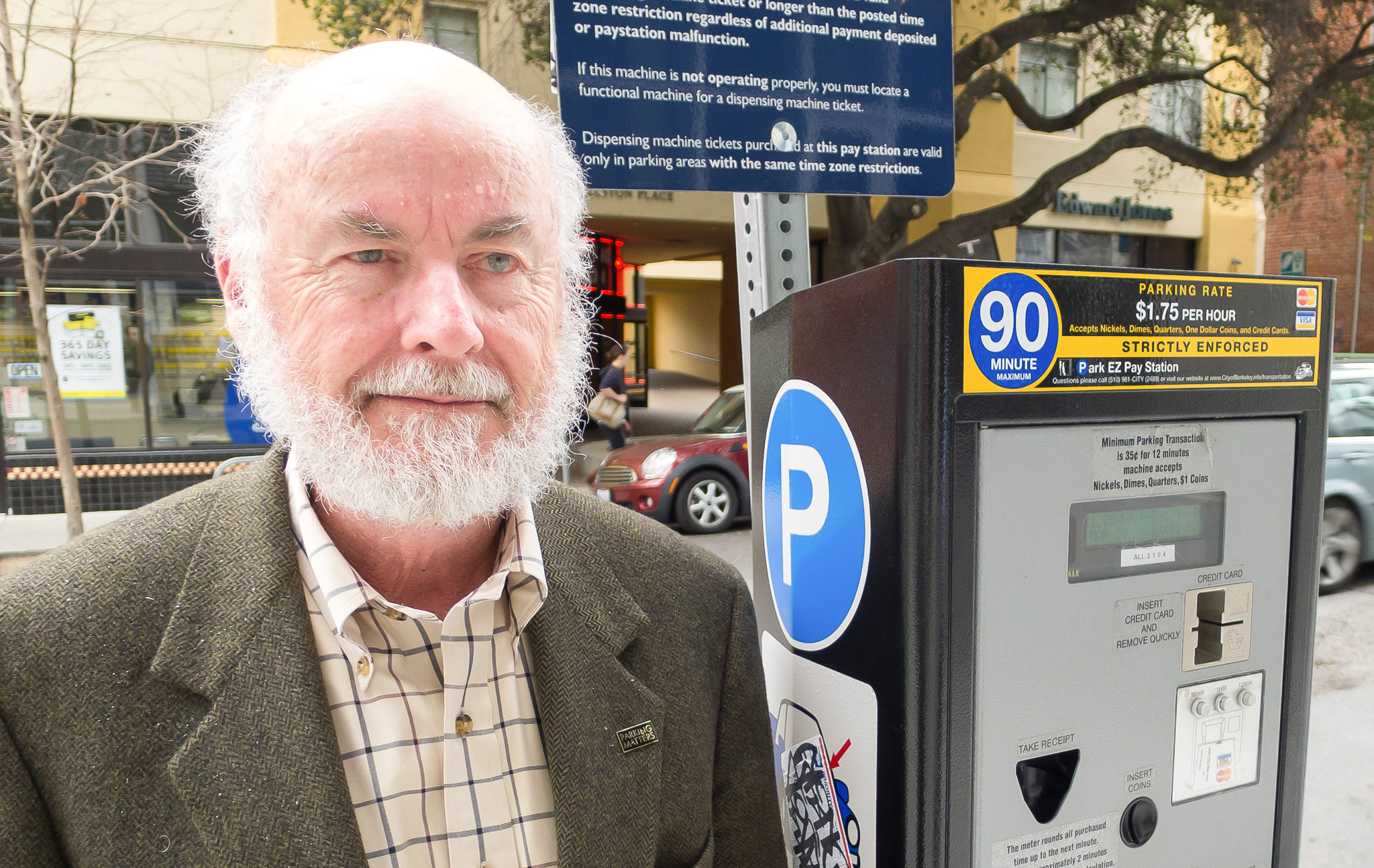 Pay up and read up

The principle of making people pay more for better spots is the brainchild of Donald Shoup, professor of urban planning at UCLA. Shoup, 74, is the author of The High Cost of Free Parking and has been studying the topic since 1975. “I’m an overnight success,” he quips.

Like a sci-fi author, Shoup devised an elegant system to change the world using technology that didn’t yet exist. Unlike most sci-fi authors, he has seen his vision become a reality — and not just in San Francisco but in Los Angeles, where the ExpressPark program covers 6,300 on-street spaces and 7,700 city garage spaces, and in Seattle, which is taking a low-tech approach in which people with clipboards count parked cars.

“The way it works is pretty much as I imagined it,” says Shoup, who is bearded and professorial and seems an unlikely guy to boast a 1,500-fan Facebook page (“the Shoupistas”). “What I didn’t understand is that it takes so much hard work and preparation and public outreach and political compromises.”

I met Shoup and Primus at the Smart Parking Symposium held in Berkeley last March. On the show floor, makers of vehicle sensors — McCain, Flir, Park Assist, Sensys Networks, TCS — vie for the attention of officials from cities that might be the next to get the Shoupista religion and put in a juicy purchase order.

Not everyone loves SFpark, of course, and critics of the program and its siblings generally raise two arguments. First, they say, it’s a money grab by city government. Primus is ready to smack this one down. “We’ve lowered rates more often than we’ve raised them, and we are legally obligated to find the lowest rate possible,” he says. The average rate charged at meters has gone down over the course of the program, and overall revenue is stable.4 And 17% of blocks in the pilot area now charge the minimum rate: 25 cents an hour.

Second, opponents argue that the program is unfair to the poor. “People who don’t want to pay for parking push poor people out in front of them like human shields,” says Shoup. The main problem with the argument is that wherever parking rates have gone up under SFpark, there’s generally much cheaper parking one or two blocks away. Also, all meter revenue in the city goes to fund transit, and low-income San Franciscans are much more likely to ride transit than to own a car.

Show me the data

Does John’s experience represent a new era of buttery smooth downtown parking, at least for those willing and able to pay up to $6 an hour?5 Or is it just an anecdote? “We don’t know for sure,” says Primus. He observed that price changes are becoming less frequent, indicating that supply and demand are reaching equilibrium, but the city will be analyzing data this summer and fall to see if dynamic prices are having the desired effect of opening up top spots and reducing cruising time.

Ultimately, we’ll also want to know the effect on city traffic. SF Muni buses have a deserved reputation for getting lapped by octogenarian pedestrians. If they no longer have to compete with circling drivers, will the bus go any faster? That would be a big win for straphangers, all thanks to a program they’ve probably never heard of.6

If demand pricing works, the cities that will benefit most from it aren’t in the U.S. “Beijing and Shanghai have many more people and many more parking problems,” says Shoup. “I’ve been invited all over the world, and people are blown away by the images of how SFpark works. Finally, the United States is way ahead of the rest of the world in applying high technology to a social problem.”

Photos by the author.

Matthew Amster-Burton is a Seattle freelance writer covering food and personal finance. He has written for Gourmet, the Seattle Times, and the Wall Street Journal, and writes a weekly column for Mint.com. His new ebook, Pretty Good Number One: An American Family Eats Tokyo is now available.