The Netherlands’ aggressive support of bicycles makes their use across all ages and walks of life possible, writes Lianne Bergeron. In a companion article in this issue, “Hub and Spoke,” Elly Blue looks at a growing momentum for family bikes in America. 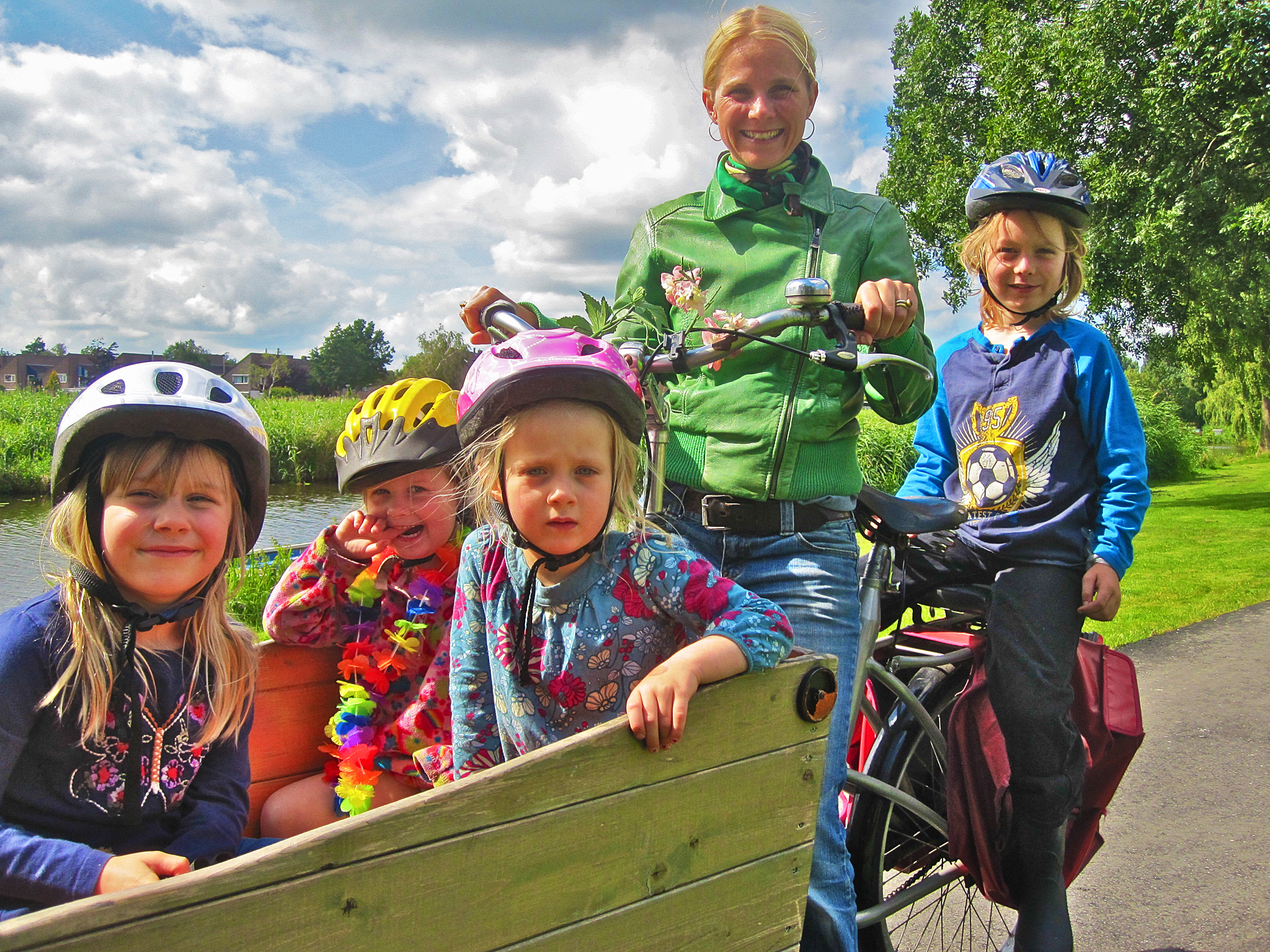 The Netherlands is home to over 18 million bicycles. This is a staggering number when you consider that the population is only 16.5 million people. About 84 percent of the Dutch own a bike, which works out to about 1.3 bikes per active cyclist. The country has close to 35,000 km (22,000 miles) of cycling infrastructure, which in a country the size of a peanut — or more precisely, the size of Maryland — is quite a lot.

I am a Canadian girl who used to drive everywhere, had her license when she was 16 and a day, and managed to put more mileage on her parents’ car before she turned 20 than in the following 20 years. Now I live just outside of Amsterdam and own four of those 18 million bicycles.

I have a bike for the city, which I leave parked by the bus stop so that I can get around Amsterdam. I have a regular bike here at home that I use for quick zips around town. There’s a cargo bike (or bakfiets) for family outings. And I still use my old L.L. Bean cycle, purchased over 20 years ago, for the occasional long-distance ride.

I’ve never tallied up my total kilometers biked over the last 15 years, but a rough calculation has me nearing 30,000 km (18,000 miles). That’s like biking across Canada six times — and I’ve driven it only once.

For every purpose, a bike

My cargo bike is built for six. It seats four children in the front, one on the back, and me. If it’s not full of kids, it’s full of groceries, school bags, other bikes, beehives — my husband’s hobby — and the occasional borrowed chair or table for a party. Every day, I get up, have breakfast, and take my kids to school and head to work on this bike — every day, rain or shine, snow or sleet, wind or wind. There is a lot of wind where I live.

I was working in Amsterdam when I met my husband, who is Dutch. I’ve stayed, however, not only because of the marriage or the weather or the drug laws. It’s the biking and the lifestyle that comes with it. Before living here, I biked around the block as a tyke, and occasionally to school. Now I have the Dutch mindset: use a bike where you can, when you can. I never think about using the car. Rather, I think about which of my four bikes I need to pull out.

The Dutch government has made it easy by providing the infrastructure needed for safe and efficient cycling. Creating bike paths and lanes is important, but a lot of other components make it into an ecosystem: bike signage, bike traffic lights, bike repair shops, bike-purchase tax breaks, and bike right of way, as well as a well-designed bike parking system.

This is further enhanced by the diversity of types of bikes and the accessories designed for them. Some bikes, like my cargo one, carry kids and groceries. There are clip-ons for baby buggies or dog leashes, and crates in the front and bags on the back for extra carrying space. Add some good old-fashioned tie wraps on the tires in the winter, and you’re ready for biking in the snow. 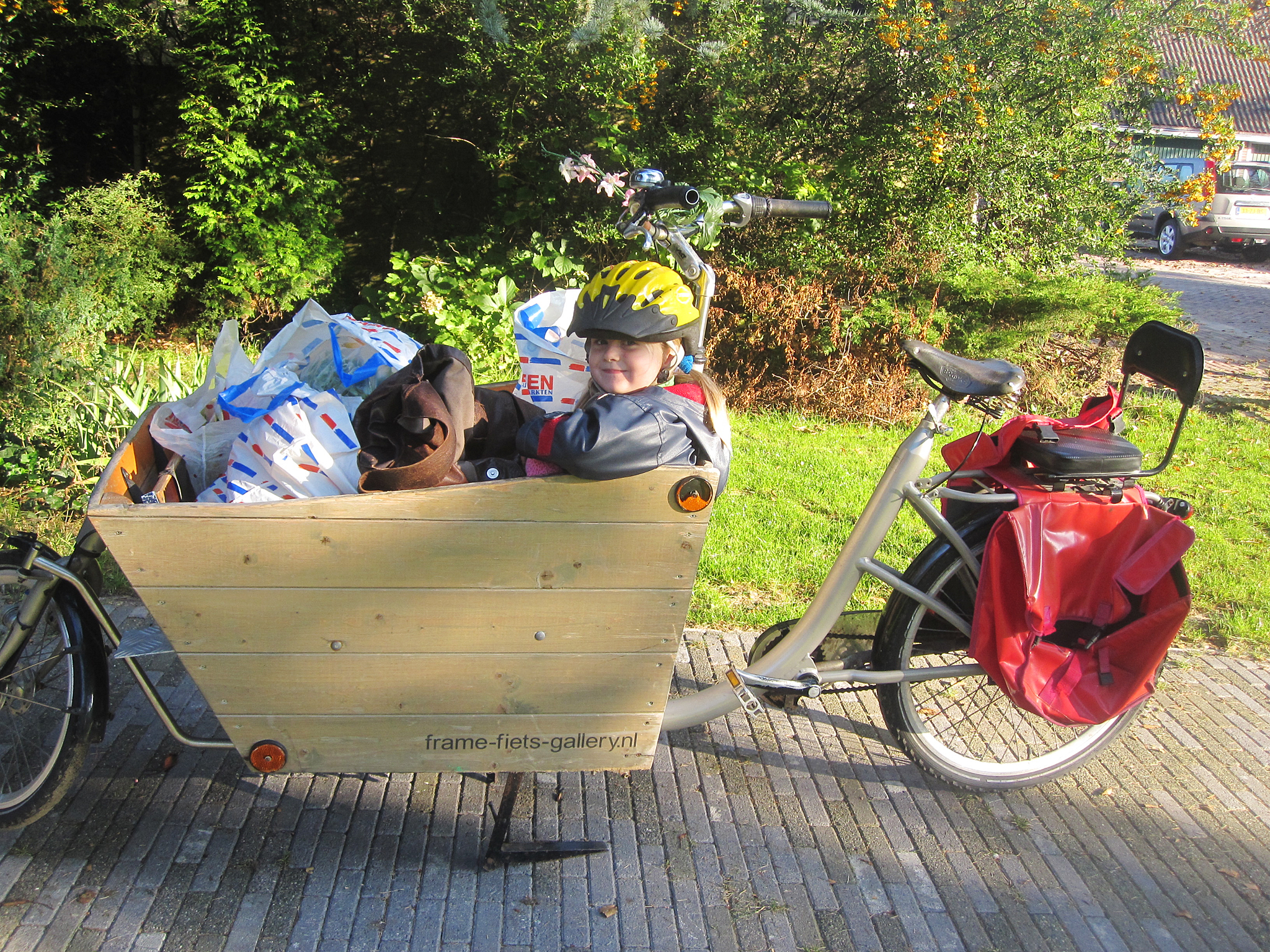 There are taxi bikes, foldable-portable bikes the size of a small suitcase for use with public transport, cargo bikes with two or three wheels, kid bikes, speed bikes, back-break bikes…and the list continues. Electric bikes are gaining market share by enabling the elderly and others to cycle while using the extra support of the bike generator. There is, quite literally, a bike for every occasion.

This becomes clear in another remarkable number: over a quarter of all trips in this country are made by bike, with up to 59 percent of them within cities. The national daily biking average is 2.6 km (1.6 mi.), and that number includes trips by kids and the elderly. Denmark follows, with a 1.6 km average, and the United States lags at 0.1 km. The percentage of the elderly still using bikes for daily trips is 24 percent, double that of Germans and Danes.

Even though there are all these bikes on the road, there are per capita fewer biking accidents here than in any other country. There is an overall acknowledgment that bikes are just as important as cars.

Even the Romans are biking

Cities around the world have started to promote bike-sharing systems, which make it possible to use a bike without having to own it or find a place to stow it. In the largest cities, such storage is unavailable or expensive, and bikes with any value that are left outside are stolen. (Bikes are stolen in Amsterdam, too, and many people have two locks on their bikes; I have two for my city bike. However, I’ve only lost one bike to thieves here, and that was 20 years ago.)

Some cities have free bikes; others work with companies that charge for use, as with car sharing. These systems place bikes or bike parking near stations or end points in their public transport infrastructure and encourage people to bike as a component of a commute, taking kids to school, or running errands.

This innovation began in Amsterdam back in 1965. The city had made free bikes available for anyone to use. Although it wasn’t a huge success here, it did lay the groundwork for other cities to embrace and develop their own bike-sharing systems.

Paris has the biggest such system in Europe, second worldwide only to Beijing’s. It is run by the city and has over 24,000 bikes available for Parisians and tourists alike. New York just added its own option — currently going through the teething pains of software problems — with 6,000 bikes and plans to grow to 10,000.

Between sharing and better infrastructure, the city of London’s number of cyclists has tripled over the past decade. London has huge ambitions to become a cycling capital, modeling a lot of its vision on the Dutch system. The Danes are already ahead of the game, with newly built bike highways, and even the Romans are joining in, having purchased more bikes this year than cars, a first in over 50 years. It’s no longer an experiment; it’s a movement well underway. 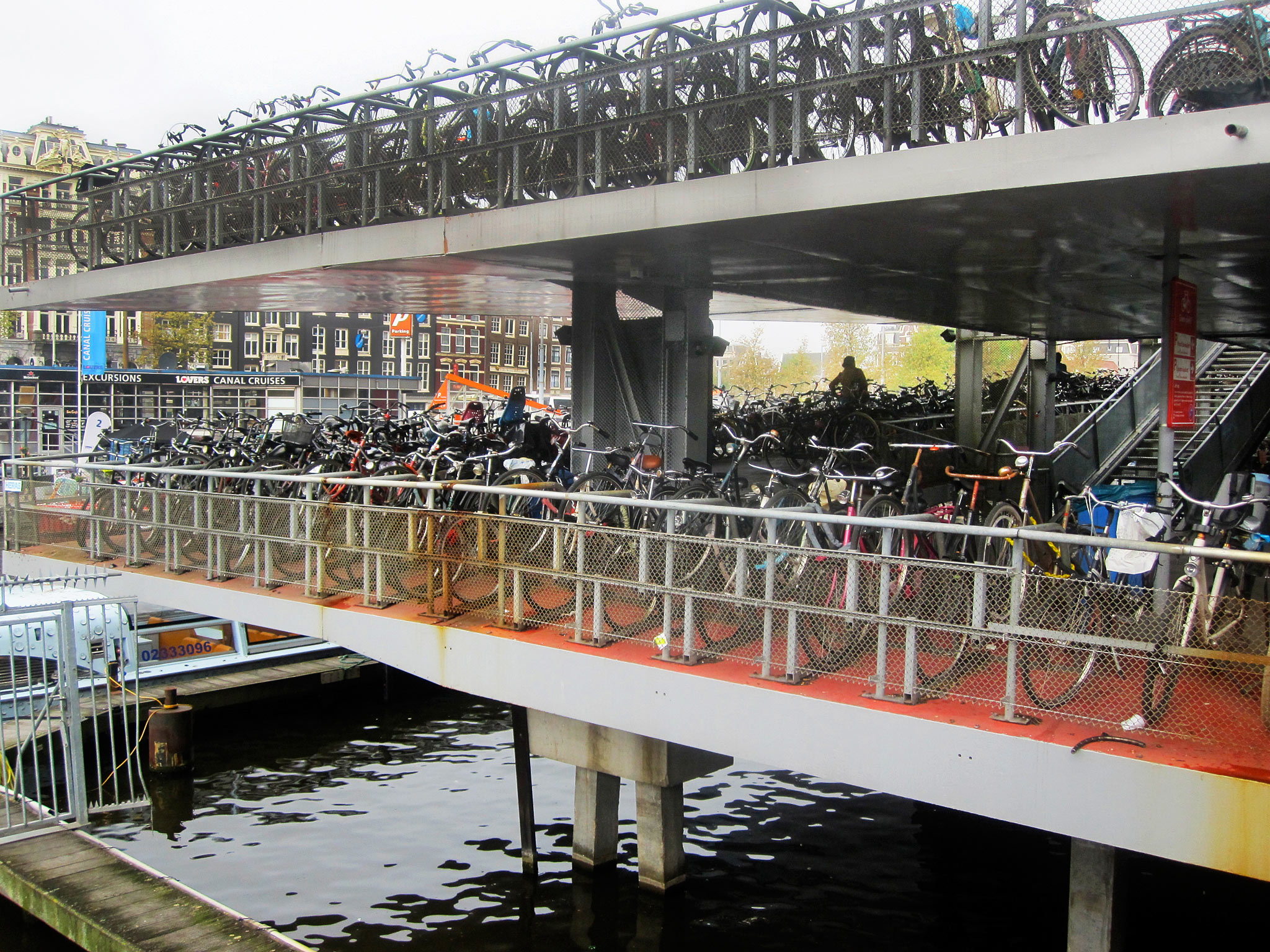 City planners and policymakers seem at last to be putting serious effort and money behind making biking a routine, safe, and reasonable part of transportation infrastructure. It’s a positive situation in every way: less traffic congestion, fewer emissions, and better legs for everyone. (On that last point, just ask my husband.) Biking can also reduce health-care costs and both improve the quality of and lengthen lives.

Because bikes are affordable (or can even be given away), cycling provides a more level playing field for those who can’t afford a car or who devote more money than they can afford to using one.

The happy lifestyle of the Dutch is well known and much envied. Biking is clearly a part of it. When I bike, I arrive at my destination already feeling good. I have avoided the stress of sitting in a traffic jam and can park anywhere. Imagine spreading those feelings around an entire population.

Sometimes it’s a challenging workout, with wind, hills, rain, or a full load, so I bike a little slower. And sometimes I would rather take the car. But I don’t. It’s my policy: I do it for me, and I want my kids to understand that, when possible, it’s better for everyone if we bike.

Lianne Bergeron is a Canadian author and entrepreneur who lives and works near Amsterdam with her Dutch husband and four kids. When she’s not teaching English, writing articles, or working on her books, she can be found on the road on her bicycle built for six.