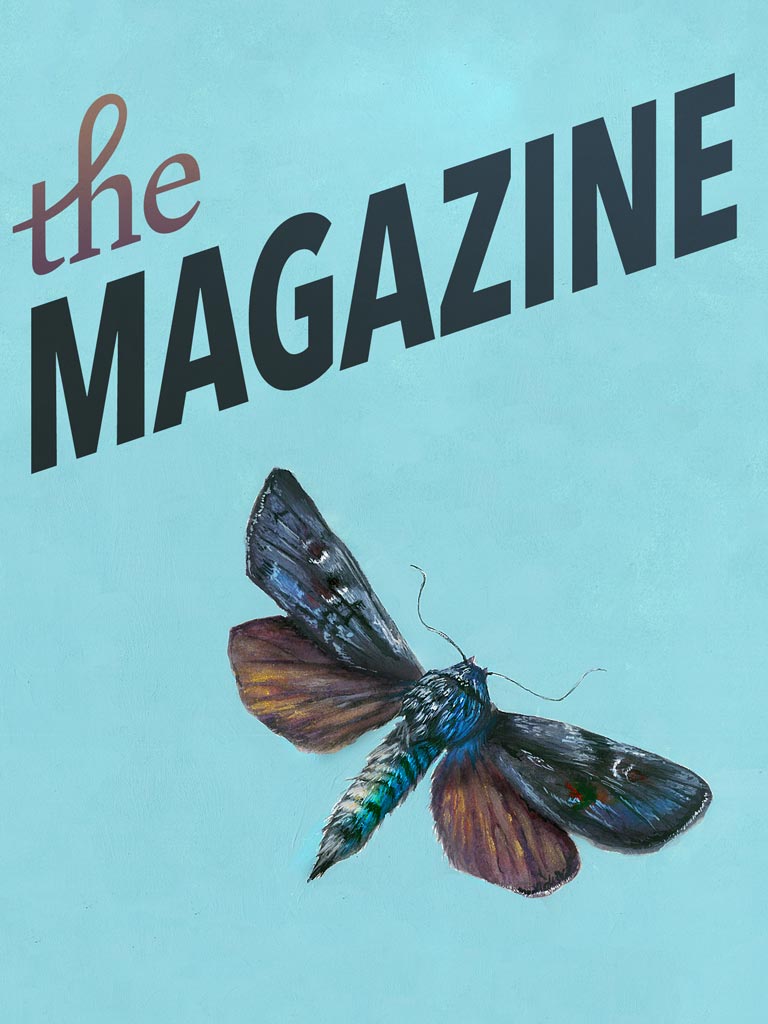 The desert attracts people, whether it’s high and cold, low and hot, or any of the many other kinds in-between. Two of our writers were lured in and came out bearing stories of the life that flourishes within.

One night, Colleen Hubbard dreamed there was a cold desert in Eastern Europe. When she woke up, her pillow was missing. Wrong joke. When she woke up, she searched online and found the Polish Sahara, a fluke of history and glacial deposits. She had to see it, and she brought back “Just Desert.”

Tim Heffernan recalls a remarkable naturalist — a man seen as secularly holy by those who knew him — who mapped insect life in the high desert in southern California. Tim attended Deep Springs College, a wholly remarkable two-year, men-only institute of higher education with a working farm and ranch and utopian roots founded north of Death Valley over a century ago. He met Derham Giuliani while there, as he describes in “Down from the Mountaintop,” and carried one of Giuliani’s treasures and some true gifts forward in life.

Owning chickens is all the rage in the cities, but what do you do with the poor cluckers when they’re past egg-laying days? Nancy Gohring finds a cultural mismatch between the sentimental city dwellers who acquire fluffy chicks and the cold-hearted reality of senescent chickens, as owners find their birds are “Laid Out.”

What does the term “disabled” mean? Can it have any sense outside of the structure of homes, buildings, and cities designed for those who are allegedly “fully abled”? Tim Maly encounters a unique designer, who has taken ramps as her specialty and is “Inclined to Help” in teasing out an answer and a strategy.

“My metal detector is working all of the time,” They Might Be Giants sing. As is Mary Catherine O’Connor’s in “Magnetic Fields.” She wondered what makes detectorists — who include the Rolling Stones’ bassist, Bill Wyman — ply their hobby. She uncovered a community that is priceless.

Our cover artwork is by Olivia Warnecke, a San Francisco illustrator and visual experience designer, who created the illustration for the article on Derham Giuliani. The moths and butterflies are drawn in part from those named for the naturalist.

Email Yourself an Issue

Just a reminder that we have added the ability to send you a Kindle-compatible MOBI file and a more generally compatible EPUB file containing the entire issue whenever we publish a new edition. You need an account at our Web site; iOS subscribers can register with our Web site at no additional cost. (See our FAQ for the few steps it takes.)

Enter an email address on the Account page for either or both the MOBI and EPUB formats. You can find your Kindle device or app’s email address within the reader hardware or software. Because we come through as a “personal document” on a Kindle, you also need to whitelist the address issues@the-magazine.org at Amazon. See our FAQ for details on whitelisting.

You can tap the Share button in iOS at the top of any article and then tap Write Letter to Editor. Or email us with your thoughts, noting any article to which they apply. We also read comments and questions on Facebook, Twitter, and App.net. (Although we see iTunes reviews, we cannot respond there; please contact us directly with any issues that need a response.)

Penultimate? This article barely scratched the paper’s surface, so to speak. You don’t know what “penultimate” addiction is all about until you dig deep into fountainpennetwork.com.

Reader Zach sent in a long missive we decided to print in full:

As a long time participant in hacker culture I have to take issue with how “Hacked Off” portrayed my community. I applaud Ms. Spinks’ effort to shine light on these problems, but her approach has painted me and many of my friends in a bad light.

I’ve been attending Defcon, and other hacker conventions, for over 15 years now. In that time I’ve seen a lot of things, including misogyny and harassment, but I haven’t seen either of those being tolerated. Nothing will get you thrown out of Defcon faster than making someone unreasonably uncomfortable. Sexism, homophobia, racism, and bigotry of all kinds is not tolerated by the staff or the attendees.

That is the hacker scene I know and love. One where everyone is treated with the respect they have earned through their deeds, and people stand up and call BS when they see it. If you attend one of the many conferences where hackers don’t hide behind anonymity, you’ll find a world where your skill counts and what’s between your legs doesn’t.

When raising these issues you have to be careful to present it in a way that may lead to improvements. Ms. Spinks had a chance to contrast the behavior in the hacktivist community with other hacker communities, to show how it can be done better. Instead she painted a picture of hacker culture in general as misogynistic and hostile, ignoring those communities which are fighting against the very attitudes she laments.

We asked author Rosie Spinks for a reply:

As is the case with any journalistic attempt to interrogate a subculture or group of varied individuals, it is very likely that members or portions of said group will feel that their experience or viewpoint was not represented accurately. However, in the reporting of this piece — which included two months of interviewing with roughly a dozen individuals, though the piece quotes only five — it was neither difficult nor a stretch to find confirmation that sexism and misogyny are rampant not just in the hacktivism and hacking worlds, but in tech at large.

You took issue with the fact that the accusations of “misogyny, abuse, threats, put-downs, belittlement, harassment, rape” were attached not just to the hacktivist community, but to the wider hacker community. However, I did not make that connection; someone with direct experience of both communities did, whom I quoted.

Based on my reporting, I found that connection to be entirely sound. I concede that it would have been prudent to back up that claim with more than one person’s experience; while I did have such confirmation, I chose not to include it. However, it is the fact that you feel you can dispute Asher’s words and experience which points to the larger problem here, which I will attempt to address below.

I have no doubt that you, your peers that you mention, and many men operating in the hacker and hacktivist space don’t harbor misogynist or sexist views and want to operate in an egalitarian world and workspace. Unfortunately, though, the hacker scene you “know and love” is simply not the hacker scene that’s experienced by women like Asher and many others; that disparity is the very nature of embedded patriarchy. The very reason that hegemony is so destructive is because we often aren’t even aware that we’re benefitting from it (in the case of men) or that it’s oppressing us (in the case of women).

You say in the first line of your letter that you take issue with how my story represented “your community.” At the risk of sounding blunt, this article was not written to represent your community. It was instead written to reflect the very underreported experience of women specifically, many of whom pretend they’re not women just to participate.

You rightly point out that stories of this nature should indicate some way that might “lead to improvements.” However, this piece simply wasn’t about what’s right in the hacker space when it comes to gender dynamics; and that’s because so very much is wrong. It is my hope that by sharing these stories, more people can become aware of the fact that improvement is so desperately needed.