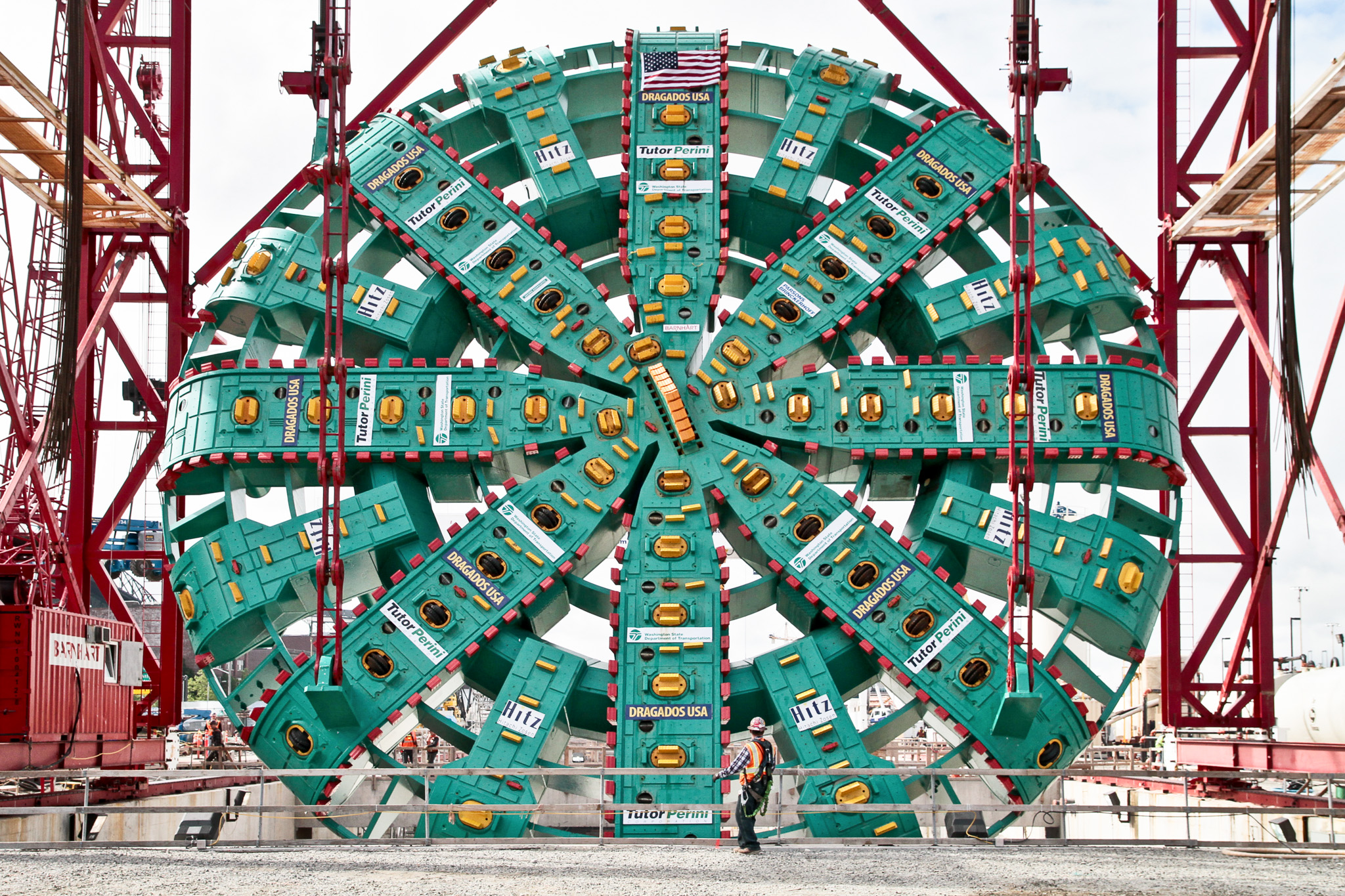 In 1926, Bertha Knight Landes became the first female mayor of Seattle — and the first of any major American city. After winning a landslide victory by promising to clean up city hall, she cracked down on police corruption and campaigned for municipal ownership of the city’s electricity company and streetcars.

And yet Bertha may still rise up to haunt him. Fifty feet below downtown Seattle, the world’s largest tunnel-boring machine, nicknamed Bertha after the city’s progressive mayor, lies still. This remarkable vehicle weighs 7,000 tons, stretches nearly 330 feet long, and has a 60-foot diameter. When fully operational, Bertha has an intrepid crew of 25. (It also has its own Twitter account, of course.)

In early August, Bertha began carving out a two-mile road tunnel to replace the Alaskan Way viaduct, an ugly double-decker motorway that has been disfiguring Seattle’s waterfront since the 1950s. The viaduct slumped several inches during a 2001 earthquake; if the temblor had continued slightly longer, it probably would have collapsed altogether.

The viaduct has been living on borrowed time ever since. Dozens of alternatives were considered, including twin tunnels, another elevated roadway, and even scrapping the highway in favor of improved surface roads and better public transport. As it happens, politicians dithered long enough for tunneling technology to devise another option: a single tunnel large enough to accommodate two levels of multi-lane traffic.

The Japanese-made boring machine is a gloriously Rube Goldberg affair. As the five-story-tall cutting face spins, earth and rocks are ground up and mixed with a soil conditioner. This biodegradable foam stabilizes the soil to the consistency of toothpaste, allowing it to be transported via screws and a conveyor belt through the machine and out the tunnel entrance. Simultaneously, pre-made concrete panels are fed forward and lifted into place on the tunnel walls by two vacuum suction arms. Finally, grout is pumped around the new panels and the machine pushes itself forward.

Controlling and synchronizing these processes are the machine’s resident crew. During 12-hour shifts that will eventually require descents as deep as 130 feet below ground level, workers enjoy all the comforts of a modern workplace, including an air-conditioned conference room, bathrooms, an infirmary, and even a fully equipped kitchen. At Bertha’s maximum velocity of 6.5 feet an hour, they do not need seat belts. Even such sluggish progress, however, remains a dream. Since beginning drilling at the end of July, Bertha has traveled an average of less than 6.5 feet a day — a total of just 1019 feet.

Initially, fiberglass rods in her launch bay wall proved unexpectedly difficult to digest. Then a labor dispute over which union would get the (four!) jobs transferring muck from Bertha’s conveyor belt to barges for disposal halted work for over a month.

Then after a series of minor repairs and tweaks, she was revved back up — and promptly hit a mystery obstacle. Workers are now pumping hundreds of thousands of gallons of groundwater away from the cutting face to see exactly what is blocking Bertha’s path. If, as they suspect, it is a boulder left over from Seattle’s glacial past, Bertha should be able to shift it. If it is something more exotic, simply ploughing ahead could damage her drills and blades. (An update on January 3: the obstructions are metal pipes left over from previous test digs by other contractors that should have been removed.)

Such caution is probably justified: once the machine has moved a total of 2,000 feet, construction crews following the borer will begin building the tunnel’s interior roadways. By sealing in the machine from behind, there will be no way to remove Bertha until she pops out in the shadow of the Space Needle, still scheduled for late next year even after all the holdups.

Many further challenges lie ahead, not all of them geological. Seattle’s soil is a chaotic mix of clays, silt, sand, and landfill from previous civic engineering projects, and the majority of excavated material is expected to be contaminated to some degree.

Even more seriously, tunneling through this unstable soil could cause subsidence at the surface. Over 150 buildings above the tunnel route have had seismic monitors fitted to detect movement. The viaduct itself has had a protective layer of carbon fiber applied and will be temporarily closed while the machine burrows beneath.

While the tunnel’s engineers express confidence in meeting their $2 billion budget and late 2014 completion date, history suggests that cost and time overruns are likely. The Channel Tunnel between England and France, which employed tunnel-boring machines as large as 29 feet in diameter (less than half Seattle’s monster), eventually came in 80 percent over budget.

Studies by the Washington State Department of Transportation suggest that even when the tunnel opens (possibly in 2015), it may not help Seattle’s famously snarled traffic. Proposed tolls would likely force motorists to divert to city streets and the nearby I-5 motorway, increasing congestion there.

When Murray’s predecessor, Mike McGinn, took office in 2009, he vowed to halt the tunnel’s construction, citing worries that cost overruns could affect the city’s basic services. His campaign culminated in a failed citywide referendum that shattered his credibility and has been blamed for his inability to win re-election against the staunchly pro-tunnel Murray.

Bertha has already chewed up and spit out one politician. As Murray settles in to his new role, he will surely be hoping that Bertha speedily finds her appetite for muck, not mayors.

The author visited Bertha last summer, before she dove underground. Despite repeated requests, he was not allowed to sit in the driver’s seat.

Photos from the Washington State Department of Transportation (WSDOT).

Mark Harris averages 7.18 minute miles running, 15.8 mph on long distance bike rides, has 6.2% body fat and has telomeres that are 8.08 kilobasepairs long and shrinking. He has written 104 stories for The Sunday Times in London, 31 features for The Economist and 1 for The Magazine. He lives in 98103. His website is shamefully neglected.