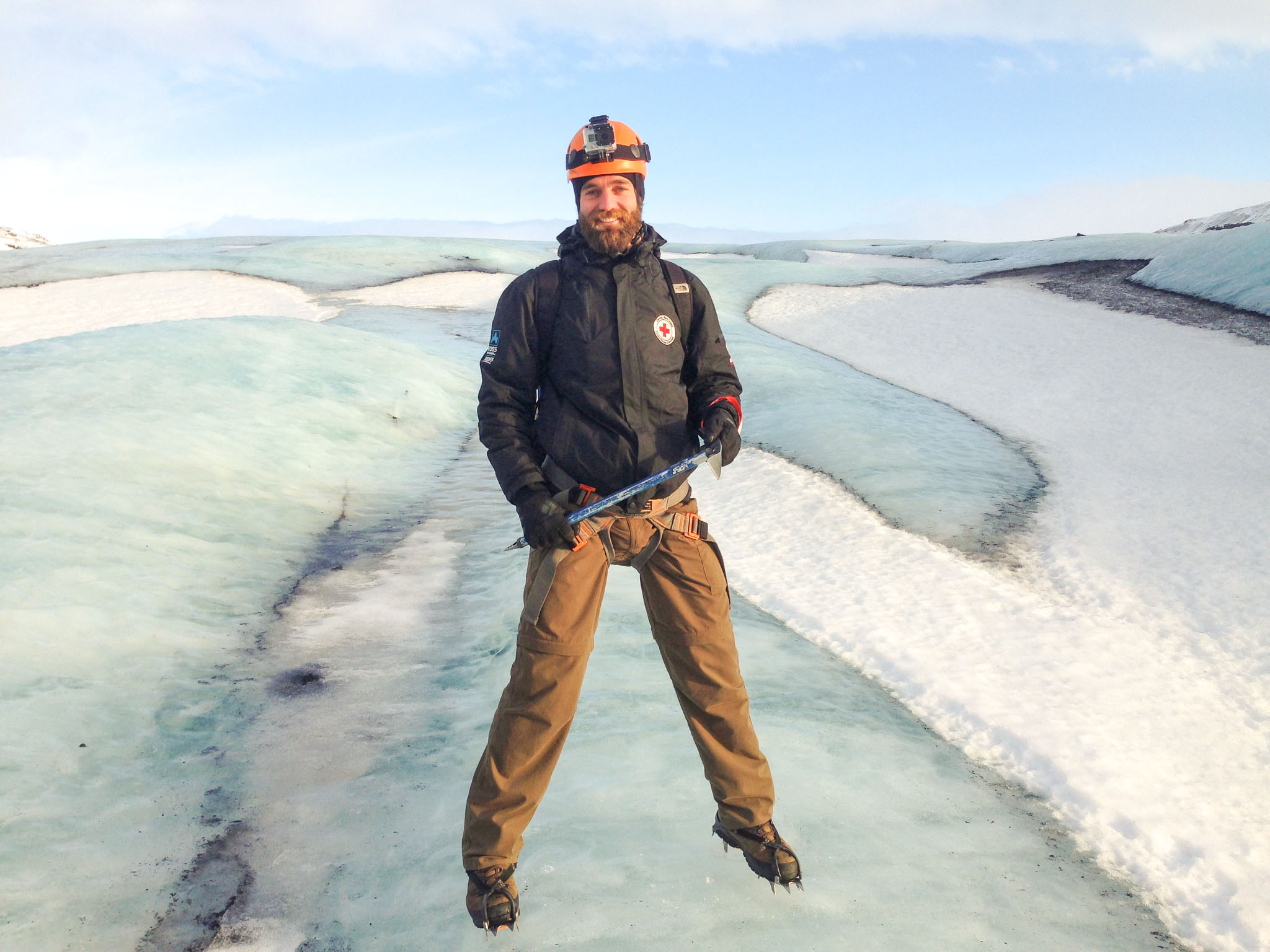 People who meet Torbjørn C. Pedersen soon start to ask him “why?” — and repeatedly. Why at the age of 35 has he quit his job? Why has he said goodbye to his friends, his girlfriend, and his family? Why has he committed to staying away from his home country of Denmark until he’s visited every country in the world — 203, by his count — in a single, continuous journey? Why is he doing this without setting foot on an airplane? Just why?

Tor — pronounced Thor, like the Norse god or the Marvel action hero — was stuck in Greenland’s capital of Nuuk from mid-January until Tuesday. “I get this question a lot,” he says. Why, also, couldn’t he leave Greenland? Because of the rules he’s imposed on himself for this trip.

His Facebook page, called “Once Upon a Saga,” plays both on the fairytale opening and his own Scandinavian lineage. It features photographs of Tor speaking at the library in Nuuk, attending the Greenlandic handball championships, dining with locals, and having tea with the chief of police — and of breathtaking sunsets.

Tor takes a picture of a sunset in every country he visits, and if there is no sunset, he takes a picture of the rain — 14 straight days of it early in the trip taught him that. He plans to make a collage of the images at the trip’s end.

“The funny thing is, I only ever get the ‘why’ question from adults,” Tor says. “No one under the age of 21 ever asks me why. If you’re young, it’s a given that if you get to travel to every country in the world, you do it and don’t ask why. It’s when we get into adulthood that we start worrying about debts, and if I’ll have kids, and where we’ll put the piano.”

On his Web site, Tor explains his motivations with a quotation by the Danish scientist, designer, and poet Piet Hein: “One must travel in order to understand that the World is round.” Although as a child Tor had dreamed of reaching every country, he dismissed it as impractical until he learned that someone else had managed to pull off the feat within four years on a small budget. “It kickstarted from there,” he says.

Tor has set three rules for the trip: He cannot fly at any point, which explains the “why” of being in Greenland since January — boats to another country are scarce. It wasn’t until April 22 that he managed to get a berth out. He must stay a minimum of 24 hours in each country. And he can’t go back to Denmark until he’s visited every country in the world. 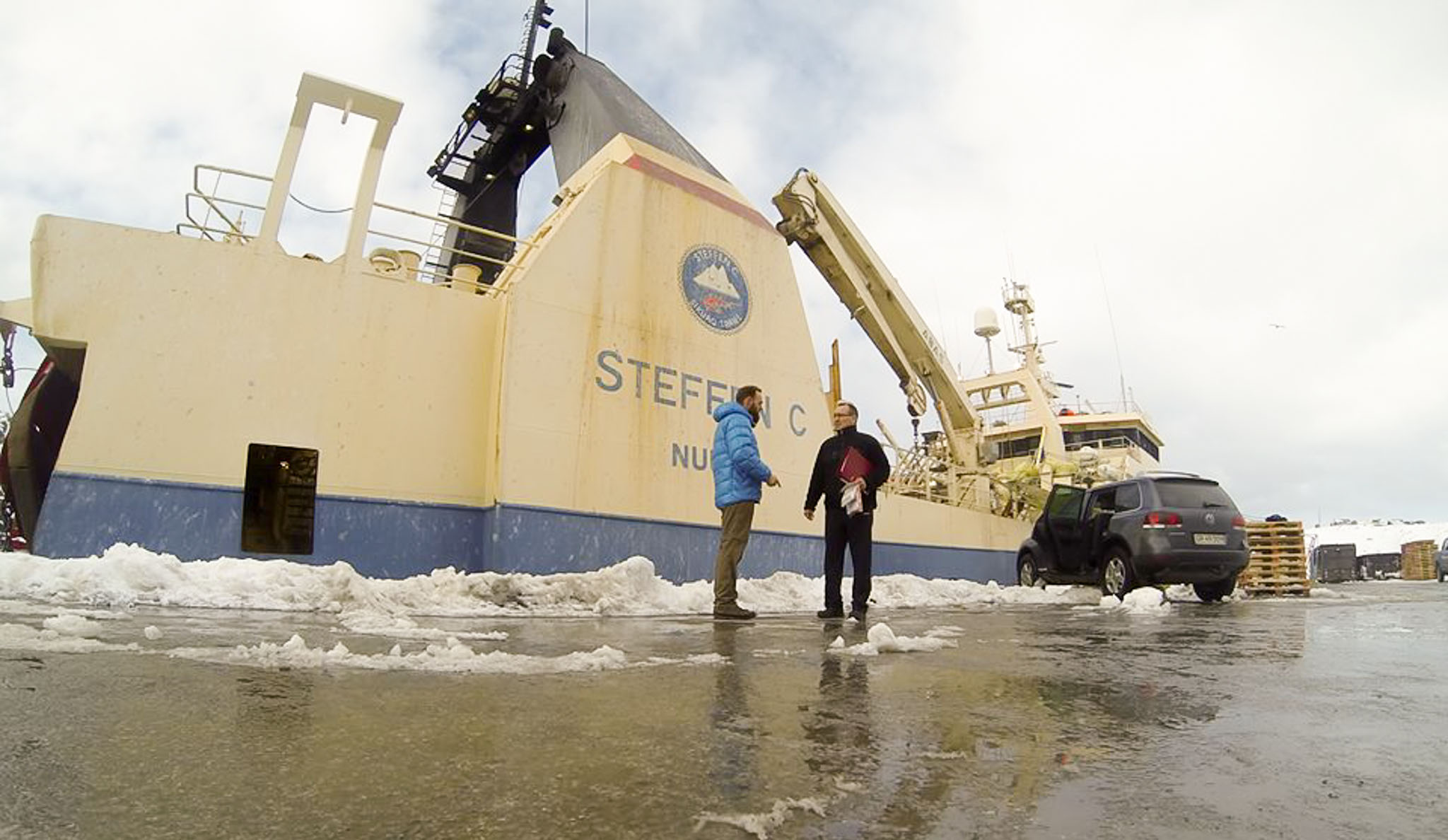 “Flying would be too easy,” he explains. “It’s not the destinations that make the trip; it’s the people that I meet that make the trip. I can barely remember anything in Belgium because I didn’t meet anyone in Belgium. If I was flying I’d spend a lot of time in airport, airport security — I wouldn’t get to see the country. There’s some ego here. I’m trying to do something that no one has done before; I want it to be hard to copy.”

Tor is tall and rangy, with a build that suggests a lifetime of physical activity. Before this trip, he spent three years in the Danish military, and 15 years working in shipping and logistics, peppered with the occasional kayaking trip around Australia or motorcycle trip across Turkey. His logistics background is evident in this trip’s detailed itinerary.

He closes his trip with a return to Asia (200–201) before ending in the Indian Ocean with the Maldives (202) and the Seychelles (203). The total is eight more countries than the United Nations recognize; national sovereignty can be murky.

Tor’s modest budget of roughly $20 a day comes from a sponsorship agreement with Ross Offshore. He also has a cooperative agreement with the Danish Red Cross and an honorific title of Red Cross Ambassador, which provides Tor a reason to connect to people, a structure to his travels, and a deeper sense of place than one could ordinarily get in a short time span. In exchange, Tor relays stories back to the Red Cross in Denmark. 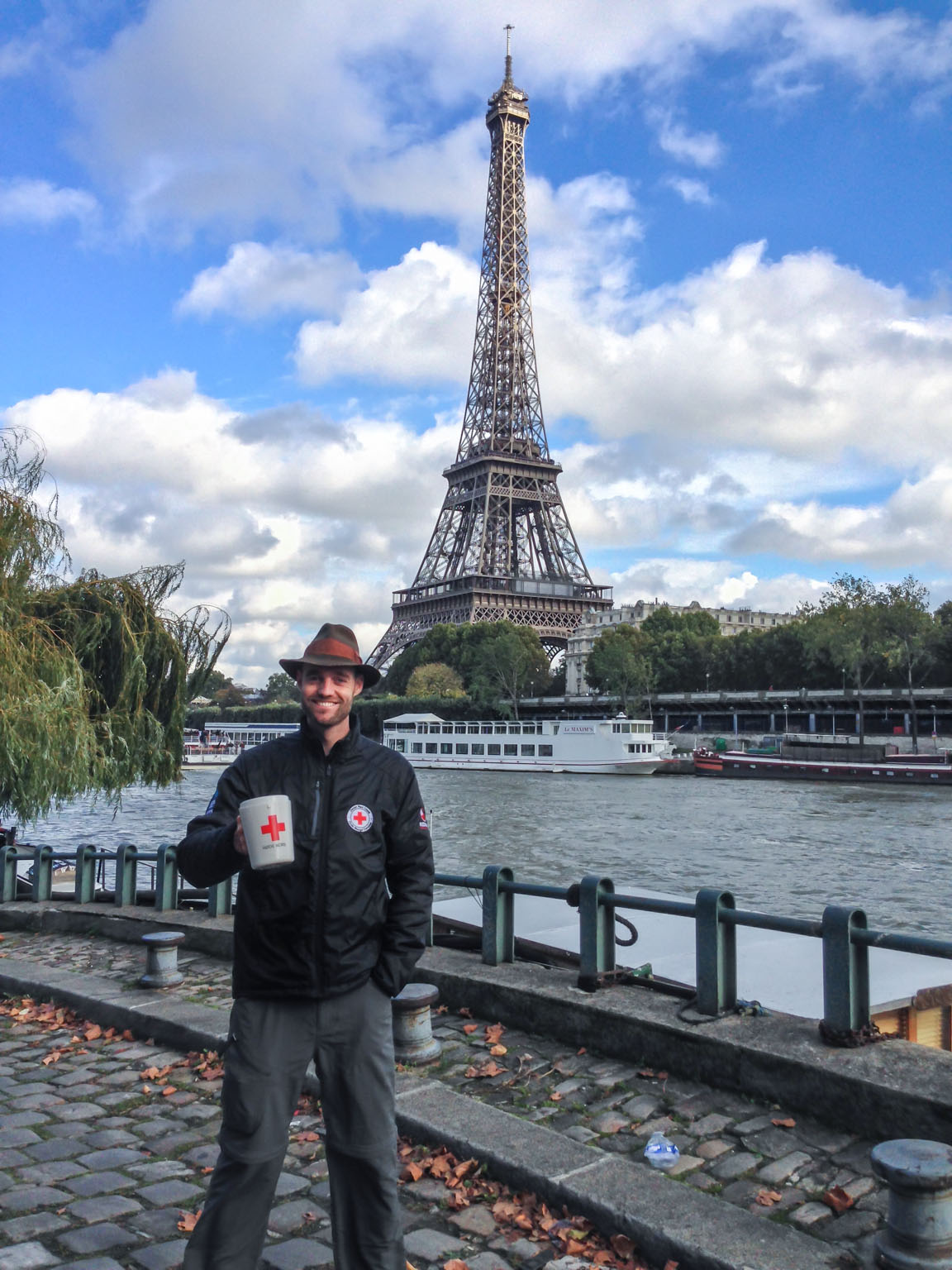 In an earlier, busier phase of the trip

“I’ve been to 40 countries now, and I was scared of doing 189 near-identical stories, but that hasn’t been the case. You go to a country like Monaco [#15] and they have so much money that they don’t really understand the problems of the poor. But they do understand the concept of donating clothes, so they donate their Louis Vuitton, their Gucci, and their Hugo Boss. The Red Cross can’t give that to a man in the mountains of Afghanistan, but they sell the clothes and use it to fund things they need.”

That story wouldn’t come up in Spain, his twelfth country, he explains, because people there rely on the Red Cross. “The country would be upside down if it pulled out of Spain. There was a quiz show in Spain where a woman didn’t know the answer and she goes, ‘Damn it, damn it, I wish the Red Cross was here.’ The Red Cross runs ambulances and supports 1.3 million people on a daily basis with food, medicine, psychological treatment.”

In Greenland, one might expect that the conversation starter would be about global climate change, given that people around the world — from the island nation of the Maldives to New York City — are concerned about Greenland’s glaciers melting and crashing into the ocean.

And yet, Tor says, “The entire time I’ve been in Greenland I haven’t heard anyone talking about the glaciers melting. Sure, the politicians debate it, but there are so many other issues that are much hotter than if the ice sheets are melting. The mentality of the people here is that if it melts it’s not a problem. They’re adaptable. If the sun is shining it’s great, if it’s snowing it’s great, if it’s raining it’s great.” 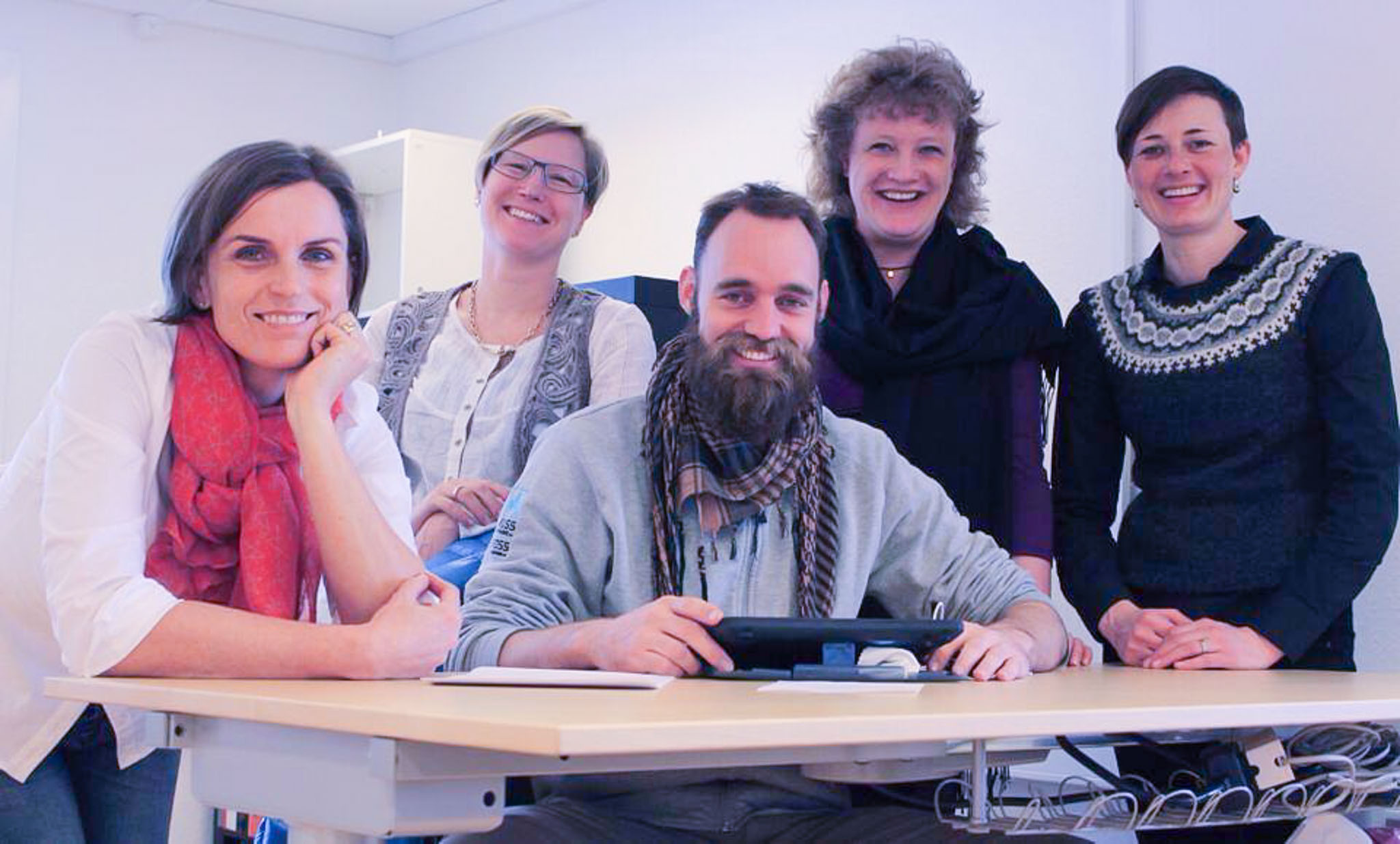 Free Wi-Fi is scarce, while friendliness abounds. “I could spend my daily budget in about an hour if it wasn’t for these fantastic ladies who opened their office for me,” Tor writes.

Quixotic, or at least equinoxic

Put to paper, Tor’s trip seems both impossible and exhausting. He spent the early part of it racing through already familiar countries, covering 16 countries in 28 days, and the toll of interviewing the local Red Cross office, securing a place to sleep, and taking the requisite pictures rapidly began to feel like work. Now that the pace has slowed, he seems to be having fun, and his reason for doing this trip — we’re all given a small slice of life to live as we see fit — answers the “whys” well enough.

That doesn’t mean that he doesn’t have fears or recognize that four years is a long time. “I worry that I’ll feel alone, that I won’t meet friendly people, that the psychological pressure of being away for so long, living off a small budget, will make me crack and that I’ll give up. There’s also a small fear that something terrible will happen back home, and I’d have to seriously consider going home.”

A few months in, none of those scenarios have cropped up, including the loneliness. Friends and family may pop up at points along his journey — they’re not bound by his inability to fly. His girlfriend, Le, recently visited him in Greenland. But it’s the people he continuously meets, even in the sparsely populated country he’s been in for months, that bring a sparkle to his eye.

“Would I help anyone, and I really mean anyone, in the way that I’ve been helped?” he says. “I meet people and before they know anything, they go out of their way to help me, invite me inside of their homes. And when you think about it afterwards, it almost brings tears to my eyes; people are really, really friendly throughout the world.”

On short notice, he left on Tuesday for Iceland, and, from there, proceeds undeterred to the next 163 lands on his roadmap and the stories — and people — he will find.

Kendra Pierre-Louis is a writer, researcher, and environmental strategist based in Queens, New York. She is the author of Green Washed: Why We Can't Buy Our Way to a Green Planet (Ig Publishing). Kendra has worked for the United Nation's Environment Programme, written for Newsweek, and appeared on CSPAN.