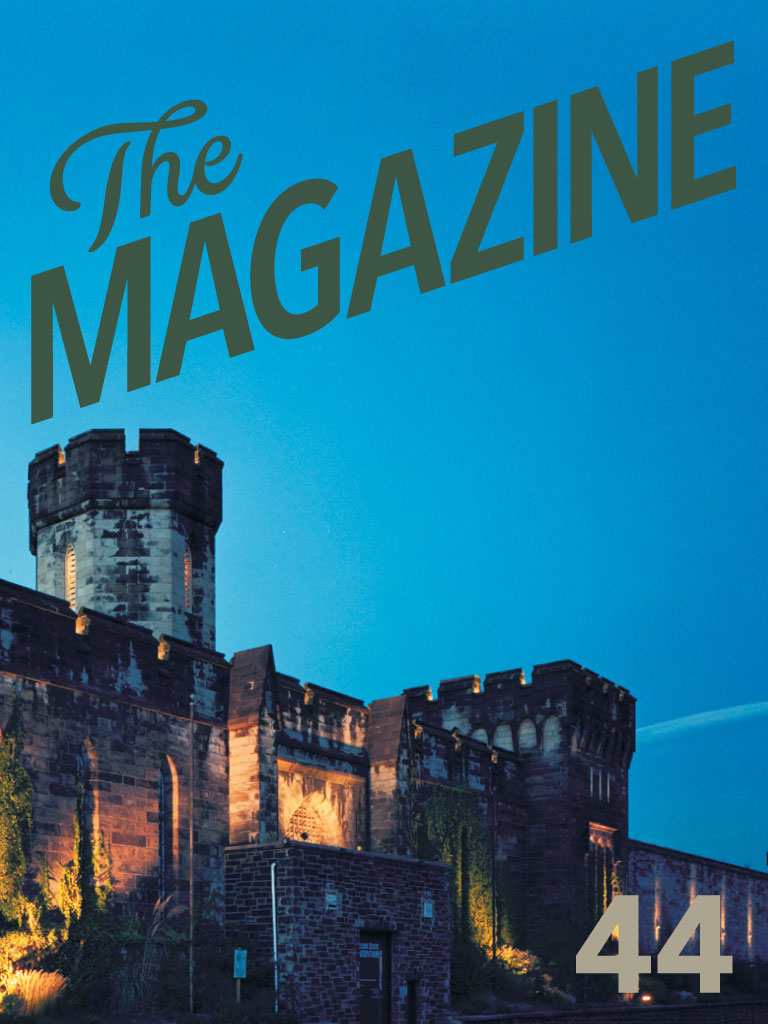 There are many words in English for a place of involuntary confinement. A list of such terms is so popular — its origins unknown — that it appears on many Web sites in exactly this form:

(Jail, in America, is a place of short-term confinement, typically where you await trial, and operated by sheriffs.)

We have so many terms because so many people have been imprisoned and so many more are in prison now. America incarcerates more people per capita than any other nation in the world: about 50 percent more than Russia and four to five times more than China.

In that light, Theresa Everline explains how the world’s first penitentiary, a place literally designed to encourage penitence, became a museum that offers artists a place for site-specific work that references the prison and prisoners. The museum has a Captive Audience, but it fosters captivating work. One of the works at the museum physically depicts the statistics above.

We’ve all pulled a potato chip out of a bag or a carrot from a bunch and thought, “That looks just like Teddy Roosevelt.” We haven’t? Well, your president may vary. But seeing faces and shapes in food is not unusual. (The Faces in Things Twitter account often features comestibles.) Photographing cheese curls that are Curly with a Fringe on Top is a bit more so. Gabe Bullard talks with Andy Huot, the creator of a popular Instagram account featuring carefully shot photos of cheese curls that look like things. Gabe examines why we, too, pay attention to such things.

Jonathan Seff thinks inside the box rather than Off the Grid as an erstwhile crossword-puzzle maker. He sold a few, and it’s hard work to make and market them. Jon talks to the fellow who makes the leading software used by constructors, as well as to makers and mentors. You can download one of Jon’s unpublished puzzles at the end of his article.

Finally, in Funny Face, Kevin Purdy looks at P22, a font foundry that looked to artists for inspiration for its early designs. It wound up buying a hunk of waterlogged type-design history that it’s trying to recover.

Had to quickly share my favorite kiss cam moment of all time: Steve Yzerman planting one on Martin Lapointe during a stoppage of play in a Detroit Red Wings game.

You can tap the Share button in iOS at the top of any article and then tap Write Letter to Editor. Or email us with your thoughts, noting any article to which they apply. We also read comments and questions on Facebook, Twitter, and Google+. (Although we see iTunes reviews, we cannot respond there; please contact us directly with any issues that need a response.)