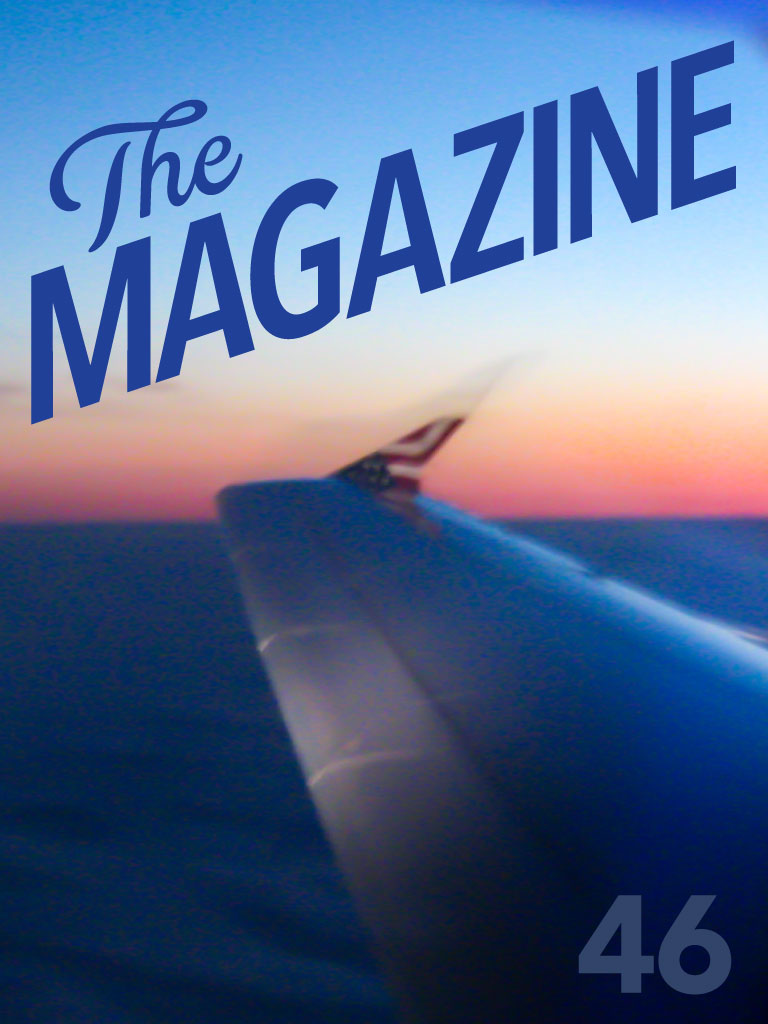 The wingtip of a Virgin America plane; photo by Glenn Fleishman

Amelia Rose Earhart, who Liana Aghajanian wrote about in our last issue, is 11 legs into her re-creation of her eponymous predecessor’s trip, having flown from Oakland to Miami, thence to Trinidad and Tobago, and then to Brazil (tricky timing during the World Cup). She next crossed the Atlantic to Senegal and is traversing Africa en route to Singapore. (I’m writing this note a few hours after she and her co-pilot touched down in Senegal on June 30.)

She’s well along her itinerary already, and you can watch videos from the cockpit.

If all goes according to our current timetable and plan, we will be releasing an entirely new version of our app before the July 17 issue is published — most likely a day or two before. We’re very happy with the change, which will, among other things, let people who aren’t subscribers purchase individual issues.

The new app works only in iOS 7, but we will continue support for iOS 6 users indefinitely. If you still use iOS 6 or cannot update to iOS 7, make sure not to update to our new release; it shouldn’t be presented to you as an option, but I have seen this happen with some apps.

Because of the change, iOS 6 users will no longer receive iOS notifications, so if you want to know when each issue is published, please subscribe to our very low-volume email announcement list.

As part of the change, we’re switching to password-based user logins on our Web site. iOS subscribers have full access to our Web site included in the price of subscription, and site subscribers likewise have full access to the iOS app. In our new arrangement, you still get that access, but instead of activating via a link sent through email, you can log in with your email address and a password that you set.

We’ll be sending out an email with details to all of you who subscribe via our Web site, all Kickstarter and gift-recipient subscribers, and all iOS users with active subscriptions who registered at our Web site. Please contact us with any questions.

The United States celebrates its birth every July 4, even though there are other dates that might be more accurate. But let’s not quibble. It’s enshrined in memory and commemorates a remarkable historical occurrence: a nation forming out of the notion of an inherent right to self-determination — for white unindentured men, to be clear — that eventually expanded into a robust, inclusive democracy that remains a work in progress.

Because we have three publication dates in July (as a fortnightly periodical) but charge the same monthly rate, we dip into our archives on these occasions to give you a blast from the past. This week, we chose four stories rooted in American history, places, and traditions.

We start with people rediscovering the art and other projects created by the Works Progress Administration (WPA), a marquee program of the New Deal. The WPA employed about 8.5 million people, modernizing infrastructure and sometimes creating beauty along the way. A lot of the work has been neglected, forgotten, and lost. Celeste LeCompte, who was selected for a Nieman Foundation for Journalism fellowship this coming academic year at Harvard, explains the Works in Progress of the Living New Deal, which is trying to document and rediscover WPA treasures.

Baseball is an American tradition, and its fundamental rules have changed very little in the last 150 years. But there’s been an extraordinary difference in the last decade in how, in an era of sky-high payrolls, ball clubs figure out the most efficient way to bring in the most valuable talent. The book Moneyball explained a decade ago how the Oakland A’s used statistical analysis to data-mine an affordable team on a relatively modest budget. Despite the widespread adoption of its approach, Phil Michaels writes in Three Strikes, You Shout (from last October) that commentators, writers, and former ball players still haven’t gotten with the program.

Cara Parks examines Pilgrim’s Progress, taking us to the Plimoth Plantation’s re-creation of life in 1627. Our interpretation of the past is always colored by the present, and Cara looks at how the organization has evolved both its presentation of history and its inclusiveness over time. She follows one interpretator in particular, a woman who started participating as a child.

On “Own the Past”

With the perspective of an independent contractor working on digital repositories at the Library of Congress from 2003–2010 (the National Digital Newspaper Program, and a bit on the WDL), the difficulty in building long-lasting digital archives is woefully under-appreciated by even the most technologically savvy. Most of us working in technology have been spoiled by Moore’s Law: five years is a long time; ten years is an eternity.

Libraries work in timescales greater by an order of magnitude or more. The Web site through which these archives are exposed represents only a small fraction of the total effort — the work to come up with specifications, storage systems, and file formats with the goal of keeping them for hundreds of years dwarfs the HTML rendered by our browsers. Add on top of that the effort to determine what to digitize, how to safely digitize often fragile irreplaceable materials, how to transport the bits (shipping hard drives remains very common), and the mechanisms to assure quality and provenance of both the content and the metadata. All of that happens behind the scenes, and often on a shoestring budget.

For Mexico to make a commitment to such a Herculean effort shows a deep understanding of the value of both their past and their future, and the importance of controlling it. Good for them!

You can tap the Share button in iOS at the top of any article and then tap Write Letter to Editor. Or email us with your thoughts, noting any article to which they apply. We also read comments and questions on Facebook, Twitter, and Google+. (Although we see iTunes reviews, we cannot respond there; please contact us directly with any issues that need a response.)