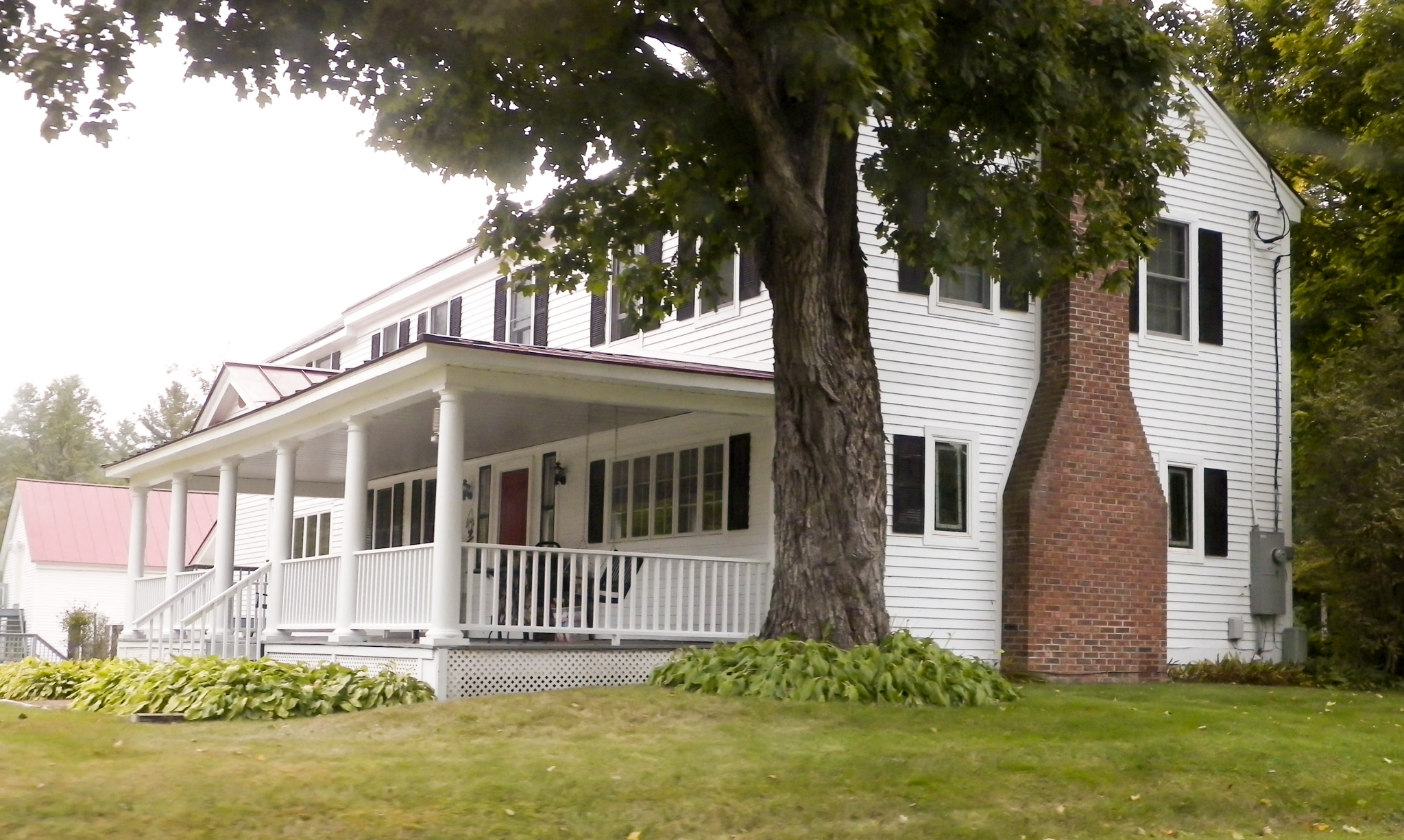 “The first thing we did wrong was to begin work on a Friday. Never start anything on Friday. It’s bad luck.” Donnie Boyton rocks back against the plaid couch he’s positioned on. The musk of wood smoke fills the house, and the maple trees outside the window are streaked with crimson.

“I was at Honto’s big-ass rock all summer once, logging. We cut about 40 trees, and they fit in the cave just perfect. Next month, the dog had a dozen pups and every one of them died.”

Boyton is a 60-year resident of Chittenden, Vermont, the former “Spirit Capital of the Universe.” Today, it’s a small township of rolling emerald slopes, roadside farms, and a country store called the Wooden Barrel. Visitors are more likely to stumble through on their way to the Ben and Jerry’s factory in nearby Waterbury than to come in search of otherworldly visitations. But in the 1870s, that’s exactly what drew a host of journalists, magicians, and believers to the Green Mountains. It was during those years that the Eddy brothers called a farm on Chittenden Road home.

Honto’s “big-ass rock” is a small cave formation in the woods where the Eddys held nocturnal séances. Witnesses claimed to see an entire spectral tribe of Native Americans rise from the shallow confines of the cave on a mild night in May 1874. For his part, Donnie Boyton hasn’t been back to the spot since logging there some 40 years ago. His trouble that summer didn’t end with the dead dogs. He and his co-worker suffered through a plague of family deaths, broken bones, and malfunctioning machinery. Only when they removed the trees from Honto’s Cave did their luck finally change. 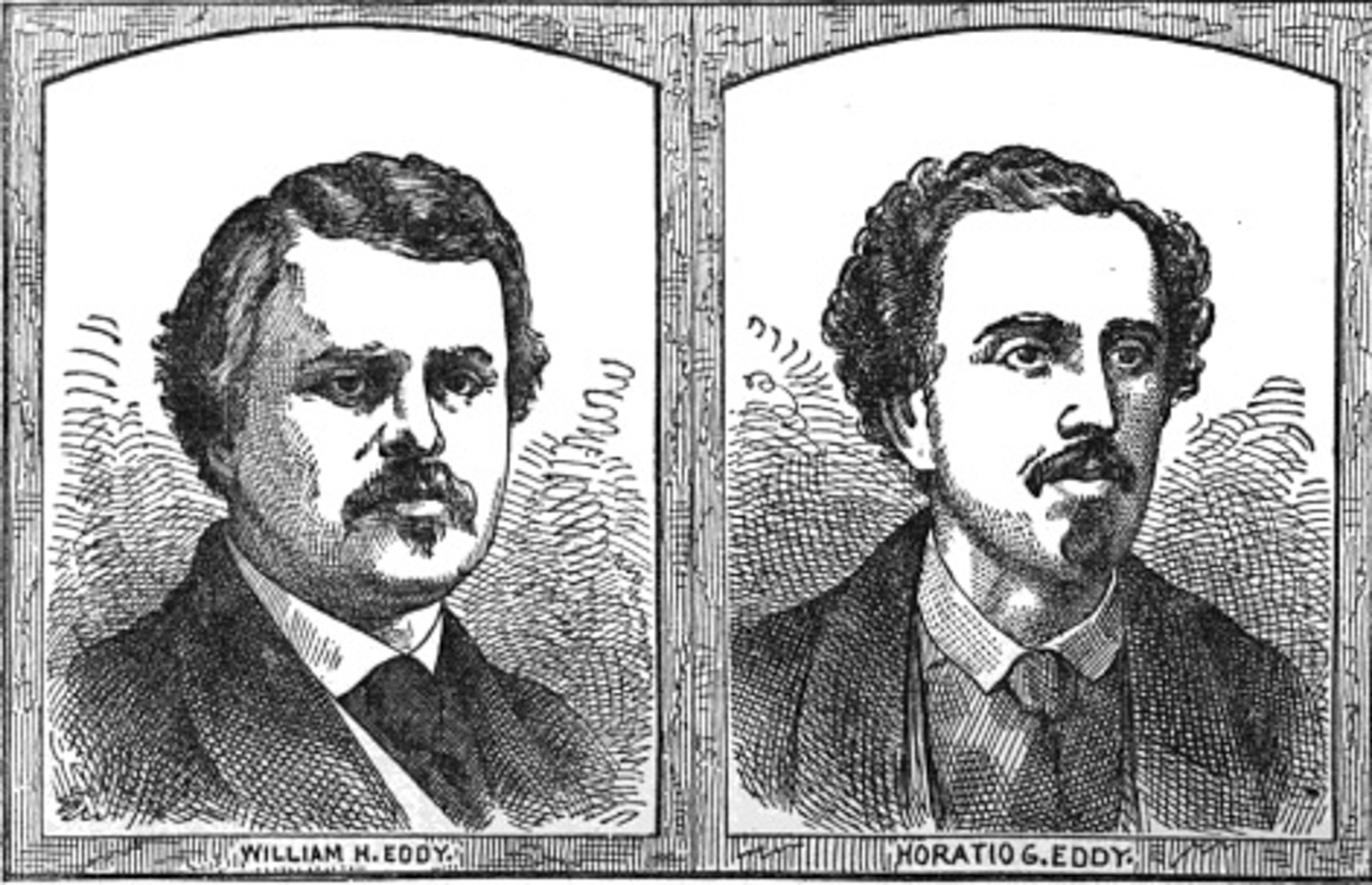 Conjuring spectral figures was just one talent in an array of baffling abilities the Eddys seemed to possess. Concealed within a small space known as a spirit cabinet, William and Horatio Eddy also induced “ecotoplasmic materializations” that danced around the room and played musical instruments with invisible hands. And of course, they could levitate.

Harry Houdini mentions in his exposé on psychic fraud that Horatio supposedly levitated 26 evenings in a row at the Lyceum Hall in Buffalo, where he and his chair rose to the ceiling and casually hung there for a time on the chandelier.

Inside the spirit cabinet

Horatio Eddy gave what was called a light séance, named for the fact that the lights remained on. Two observers would be led into the spirit cabinet with the medium. The medium always sat in the chair to the audience’s far right. A sheet was drawn across the participants’ chests and pinned into place, and each person was required to grasp the forearm of the observer in the middle chair with both hands. The purpose of this ritual was to bind the medium as tightly as possible and prevent him from using his hands.

Because light séances were held in full view of an audience, they were considered more convincing. Psychic researcher Hereward Carrington, however, was less than stirred. In a 1919 Popular Science article, he insists that all a medium needed to free his grip was a pliable piece of lead, which he would fasten around the middle person’s forearm once the sheet covered his movements from view.

Pickpockets know that when an object is removed from the body, the impression of a wallet (or in this case, a hand) lingers. The medium took advantage of this sensation and quickly replaced the grip of his fingers with the lead, leaving his left hand free to manipulate instruments on a nearby table into playing “ghostly” music.

Carrington speculated that someone played instruments with a mouthpiece, such as horns or flutes, from another room or with the use of a rubber tube that passed through a hollow table leg. A telescoping rod with a wax hand attached at the end could be employed to convince an audience that the medium was still immobile. He scoffed, “The whole trick is so absurdly simple that it seems incredible that intelligent people should have been deceived by it for an instant.”

Not everyone shared Carrington’s opinion. Colonel Henry Steel Olcott — journalist, Civil War veteran, and one of the men appointed to investigate the death of Abraham Lincoln — spent 10 weeks in Chittenden on an assignment for the New York Daily Graphic and came away convinced of the Eddys’ authenticity. In his book People from the Other World, Olcott describes the brothers as “more like hard-working rough farmers than prophets or priests of a new dispensation.”

People from another world

Not every inquest into the Eddys’ powers was confined to benign observation. Spiritualism wasn’t just a series of cheap parlor room tricks; it was an entire religious movement with its own ideology and wave of converts. As is often the case, a fervent religious movement is followed closely by persecution.

Olcott describes an array of bizarre devices designed to test mediums. One such apparatus, also used in Sing Sing Prison, fit over the trachea and prevented “spirit voices” from being produced. The “flour test” involved placing a bag of flour in the medium’s hands to make sure they did not move. One skeptic of the Eddys went so far as to mix the flour with aqua fortis (an old name for nitric acid), which burned Horatio’s fingers.

When the Eddys were children, their father rented them to a traveling showman. During this time they were bound by sailor’s rope that was sealed with hot wax, and Olcott noted the appearance of scars and a groove worn into each sibling’s hands where the flesh was stripped away. They were mobbed at shows in Lynn, Massachusetts, and their spirit cabinet was smashed to pieces while on tour in Canada.

They were stabbed, shot at, and nearly tarred and feathered in one instance. William Eddy showed Olcott a scar on the crest of his head from the time a man tried to awaken him from a trance by putting a hot coal there. Even if their powers were false, the Eddy brothers certainly inspired real fear.

The years have bled away most of the community’s hostility toward the Eddys, but a lingering air of mystery and apprehension remains among some longtime residents. Kids in Chittenden still talk about the Eddy place, scaring each other with tales of a house that moves or levitates, slowly rotating on its axis over time.

Mary Senecal isn’t afraid, though. She lives directly across the street from the Eddy house, which is now an alpine ski club. When asked if she’s ever seen it levitate, Senecal just smiles like it’s something she hears every day and says, “Never in my life.”

Eddy house photo by the author.

Leah Dearborn is a freelance writer based in the Boston area. A graduate of the journalism program at University of Massachusetts–Amherst, she spends her time writing about history, travel, books, and local events.